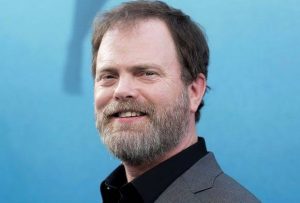 Rainn Wilson is an American actor, comedian, writer, director, businessman, and producer. He is best known for his role as Dwight Schrute on the NBC sitcom The Office, for which he earned three consecutive Emmy Award nominations for Outstanding Supporting Actor in a Comedy Series. According to, “looktothestars.org,” Rainn supports 10 charities, 18 causes, and has compiled to date, roughly 29 articles and 4 videos specifically related to these noble acts! Charities and Foundations such as Arts for Peace and Justice, Milk + Bookies, Entertainment Industry Foundation, CORE (Community Organized Relief Effort), Project Home, Mona Foundation, and the Tahirih Justice Center, to name just a few of his philanthropic endeavors. When Rainn is not crafting his talents on screen or in front of a live audience, he spends time with his family outside Oregon. He and his family are members of the Baha’i Faith. He hosts a podcast for the Baha’i blog called the Baha’i Blogcast, where he interviews notable people about the intersection of their faith and their work.