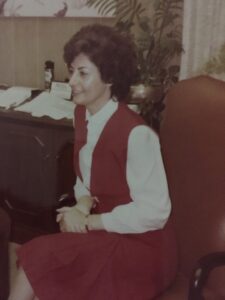 Iranian Bahá’i Nosrat Solhjoo Scott is from Yazd. Her mother’s parents traveled for a year in order to make the pilgrimage to Palestine (now Israel) to see Baha’u’llah,  both of her grandfathers converted to the Faith when they were young men.

When she first arrived in America, Nosrat was surprised to find The American Bahá’i newspaper in her mailbox and that it was perfectly normal for her to hold or read a Bahá’i book on the bus or subway, despite having heard about the freedom of religion in the United States of America.

About two years later, she started volunteering as a librarian and gave the Yonkers, New York, public library her help in creating a section just for non-English speakers, primarily Persians. As a result of her consultation with the National Bahá’í Office, Nosrat was able to obtain many reading materials and literary resources from Tehran, totaling roughly 90 books and several reference books. She was also able to acquire a few Persian Bahá’i books from the Chicago Bahá’ Bookstore.

A few years later, she relocated to Southern California because she believed the climate and her English would make serving the Faith more substantial and meaningful. Among other things, she spoke with the local media about Táhirih and Newsweek Magazine about the Iranian Baha’is. She then moved to Birmingham, Alabama for two years, while there she worked to create a cultural musical program as a fundraising mechanism to support charity and disaster relief efforts during the famine in Ethiopia that was well received by Red Cross for African Famine Relief in 1985.

She received the “Race Unity” Proclamation from George Wallace, then Governor of the State, on June 5, 1984, and as a special surprise this award was read into the Congressional Record by then-Congressman Ben Erdreich.

On the eve of 1986, Nosrat moved to South Florida, where she continued to live her “dream life” while advocating for unity in diversity and the oneness of humanity. She attended the initial Chaplain Trainee seminars at the Memorial Regional Hospital in Hollywood, FL, about 24 years ago while serving as a member of the Interfaith Council of Greater Hollywood, FL, and then started working as a chaplain at the same hospital. As time went on, she eventually expanded her service to several more Memorial Hospitals.

Dan Rather, a CBS television man who was working on a book about The American Dream, was alerted to her tale in a South Florida newspaper when she was chosen president of the Interfaith. Knowing about the Bahá’í community’s condition in Iran brought to Dan’s mind the Mayflower Pilgrims’ first freedom-related dream, and he put Nosrat’s tale in the same category.