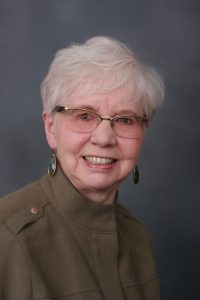 Eileen Maddocks grew up in Maine and graduated from the University of Kansas with a liberal arts degree. She worked in sales and raised two children. She was raised in the Universalist church but as an adult she became a spiritual seeker. In midlife, Eileen discovered and embraced the Bahá’í Faith. When first introduced to the Bahá’í Faith, she was seized by the fact that God has always been active in human history, that He had sent hundreds, perhaps thousands, of Prophets of God to educate humanity. Having majored in history during her university studies, Eileen was astonished to realize that the single most important factor in human history, God and His Prophets, was not recognized by professional historians. She served at the Bahá’í World Centre in Haifa, Israel, for sixteen years in positions that required extensive research and writing. Her avocation was arranging and leading day tours throughout Israel for Bahá’í World Centre staff. Upon retirement, she chose to live in the bucolic, quiet state of Vermont. Eileen’s first book, 1844: Convergence in Prophecy for Judaism, Christianity, Islam and the Bahá’í Faith, was published in 2018. It explores expectations in the West for the return of Jesus Christ, and simultaneously in the East for the return of the Promised One of Shi’a Islam. Her current project is the trilogy The Coming of the Glory: How the Hebrew Scriptures Reveal the Plan of God that presents a Bahá’í perspective of the Hebrew Bible and its prophecies and importance for us today. This study presents in a chronological, systematic manner the ministries and prophecies of the Hebrew prophets within the context of Israelite history. The first two volumes have been published, and the third one will be available next year. Quite cerebral by nature, Eileen balances her writer’s lifestyle with a study of classical ballet for exercise and artistic expression. Two cats edit her work by walking across the keyboard and interrupting her with their plaintive insistence that it’s mealtime. Eileen usually presents programs that are based on her books. But today she feels a pressing need to give a program that she believes merits attention because of the times we are in, because of how quickly events are happening. She will speak on the Major and Minor Plans of God and the Lesser Peace and the Most Great Peace. Her talk is based on two major sources: The Tablet of the Universe by ‘Abdu’l-Bahá, and “The Lesser Peace and the Most Great Peace,” an article based on a series of talks given by Mr. Ali Nakhjavani. Most of the visuals are from the NASA website.