Tahirih, Forerunner of The women’s liberation Movement of the East. 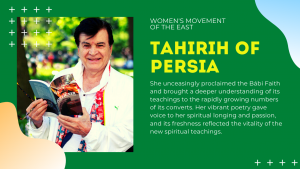 Her vibrant poetry gave voice to her spiritual longing and passion, and its freshness reflected the vitality of the new spiritual teachings revealed by the Bab. She emerged as the most outspoken of the Babi leaders. The authorities responded by having her murdered in the dead of night. At the moment of her martyrdom, Tahirih proclaimed “You can kill me…, but you cannot stop the emancipation of women.” Tahirih’s example has inspired countless women to extraordinary feats.

In the 19th century, countless individuals believed a new Revelation was imminent. In Persia, the Báb fulfilled the prediction by several clerics of the appearance of the Promised Qa’im. Tahirih of Qazvin, a gifted teacher, was at the vanguard of spreading the Báb’s teachings. She unceasingly proclaimed the Bábi Faith and brought a deeper understanding of its teachings to the rapidly growing numbers of its converts. Her vibrant poetry gave voice to her spiritual longing and passion, and its freshness reflected the vitality of the new spiritual teachings. She emerged as the most outspoken of the Bábi leaders. The authorities responded by having her murdered in the dead of night. The memory of her life survives in her poems. At the same time, many Americans believed the Second Coming of Christ was imminent. Several churches and movements emerged, some founded by women. Among them was Ellen G. White, a theological thinker who shaped the beliefs of the Adventist movement, Sojourner Truth, who came up from slavery to electrify audiences with her salvation preaching, and Mary Baker Eddy, founder of the Church of Christian Science; these women leaders were prefigured in the 18th century by ‘Mother’ Ann Lee, founder of the Shakers, and the long-forgotten female ‘exhorters’. In the hearts of Persian and American women, God’s hand was at play, orchestrating a realization of the spiritual basis of life and the need to move towards oneness.