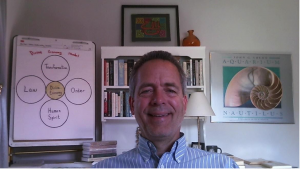 Bruce Koerber is an economist in the classical liberalism tradition. Bruce became a Baha’i in 1977 and went homefront pioneering shortly afterwards. This eventually led him to Auburn, Alabama where, providentially, he studied economics shortly after the Ludwig von Mises Institute made its home in Auburn, making it the world center for Austrian economics. Bruce is a charter member of the Mises Institute.

In the winter of 2004 an image appeared in a dream and Bruce recognized that it was a significant contribution to economics. He used his technical training in Austrian economics to deductively develop the image into what is now known as the divine economy model. Over the next seven years Bruce wrote the four core books that constitute the divine economy theory which covers macroeconomics, microeconomics, ethical economics, and economics justice. Bruce is the author of seven books, the most recent one is what will be explored in this presentation and the presentation next week. It is a free book to anyone who wants a copy. https://www.divineeconomytheory.com/#free-book-section